The Ronald McDonald House in Providence, RI (RMHP) provides affordable lodging and meals for families of children who are patients at Women & Infants’, Hasbro Children’s, and Rhode Island Hospital.  Its services are particularly valuable for families who travel a long distance or whose children are hospitalized for more than one night.

Volunteer scheduling is a central activity of RMHP.  Volunteer presence ensures that House operations and related activities are adequately supported. 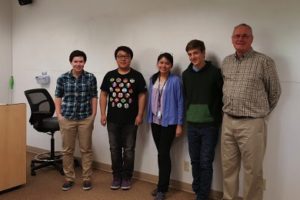 RMHP-Homebase was developed in Spring 2015 by a 4-student team at Whitman College.  This software replaces the House’s manual scheduling system by an on-line system that is easy to use and learn.  The software was deployed and continues to be in full use, allowing volunteers to focus more fully on client services.

This project is a good example of how open source software developed by one student team for one non-profit can be reused by a different student team to develop a similar tool for a different non-profit.  In this case, the 2013 version of Homebase was used as a starting point for developing RMHP-Homebase.